In 2009 I got an email from the Beijing Genomic Institute asking me if I would like to become involved in a project they are beginning, where they were going to sequence the genome of a polar bear.

I knew there was some controversy about how old Polar Bears really were – with estimated varying 10-fold. If the bears were an old-ish species, then their morphological and physiological differences could be explained by standard population processes and some selection. If they were on the younger end of the spectrum, then their differences from brown bears would require explanations of strong selection and rapid evolution.

I was also interested in generally looking at the process of positive darwinian selection, which is the process by which new mutations are favoured and appear in a population as a consequence of selection on retaining these novelties. 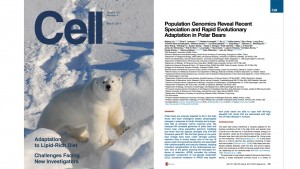 Given that I work mainly on prokaryotes and other kinds of ‘small’ things, I asked Mary O’Connell at DCU if she would like to be involved. She agreed and we enlisted our graduate students Aoife Doherty and Claire Morgan.

In the end, it was necessary to do a lot more sequencing that we thought in 2009 and finally the BGI sequenced 70 bear genomes and this allowed population-level analysis of diversity, selection and genomic change. It also allowed the analysis of introgression of DNA from brown bears (the formation of hybrids and the mating of these hybrids back into one of the species, thereby moving DNA from one species to another).

The manuscript was published on 8th May 2014 – five years after the project was started and it made the front cover of the journal Cell.

In fairness, most of the credit for this paper goes to the Danish, American and Chinese people on the project, though it took up pretty much a year of our analysis time here in Maynooth. This was an enormous study and one that I hope will be interesting for the scientific community.